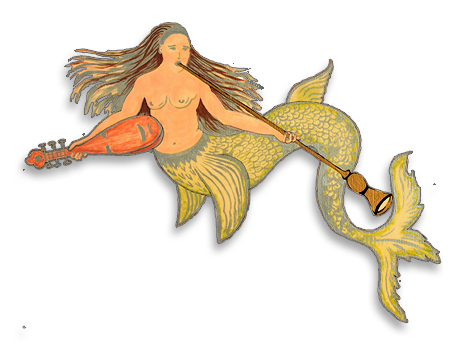 As many of you who have visited us know, Frederick W. Oster Violins occupies a very unique building in Center City, Philadelphia. As a result, we are often asked about the history of the house and its former tenants. We’ve compiled the history of the building as we know it for all who are interested in learning more about our lovely shop at 507 South Broad Street.

Established in 1974 by Frederick W. Oster, Vintage Instruments is America’s largest and most eclectic shop specializing in old and antique acoustic musical instruments. Our specialties begin with fine Violin Family instruments, ranging to vintage guitars, banjos, mandolins and ukuleles. We also work with nineteenth-century woodwinds and brass, and a wide range of historical instruments. In addition to instruments, the shop carries a fine selection of strings, accessories and cases.

In 2008 the shop moved from its previous nineteenth century building to the current premises at 507 South Broad Street, the area known as the “Avenue of the Arts.” This building was designed by architect George Pearson and showcases the Aesthetic style then in vogue in London and the East Coast of the United States. Construction began in 1882 and the building was likely finished in 1886, which was when the wallpaper hangers signed one of the walls they were finishing with their names, dates, and their home addresses. The building was commissioned by James Dundas Lippincott and Alice Lippincott as an extension to their home next door at 509 South Broad Street. Telltale evidence of doorways in the walls showed that the two buildings were originally connected. However, they may have been separated from one another as early as 1894, and certainly by 1906.

Much of the interior woodwork, from doors to moldings, and wall paneling were likely milled on site. Other details, such as the tiles and leaded glass were likely made in American workshops. For instance, many of the decorative tiles have the mark of J.&J.G. Low Art Tile works of Chelsea, Massachusetts.

Although interior photos of the building showing the original decor have yet to surface, the building is now furnished with period appropriate reproduction wallpaper by Bradbury and Bradbury. Among these is their republication of a wallpaper designed by Christopher Dresser of London, and first exhibited at the Centennial Exposition in Philadelphia.

Alice was born in Georgia in 1846 but grew up in Princeton, New Jersey. Her family’s Italianate home later was acquired by Princeton University in 1878 and is now known as Prospect House. James was born in 1840 in Philadelphia. He graduated from Princeton University in 1861 with a Bachelor of Arts. James Dundas Lippincott and Alice Potter were married in 1867. James and Alice were both from wealthy families. The Dundas family had substantial holdings in coal lands in Pennsylvania. Even after their marriage, Alice received an annuity from her father’s estate. While the couple could have continued to live in the Lippincott’s grand “Yellow Mansion” at Broad and Walnut, in March of 1875 they purchased the properties at 509 and 507 South Broad Street. The deeds to both of these properties were in Alice’s name. Perhaps she used her inheritance, or maybe James was concerned about protecting them from the protracted legal battles he was involved in concerning the probate of his great uncle James Dundas’ estate between 1871 and 1888.

James exercised no profession, though he did keep an office at 400 Locust street. The couple were known as prominent socialites, and they kept themselves busy as philanthropists who supported a large variety of institutions and causes financially and as board members. The couple were especially interested in supporting early education and medical programs serving all levels of society. A special concert was held January 6, 1888 in their home for which 500 people purchased tickets at $2/person to hear a program of music in support of the Cooking School. The presentation included D.C. Everest’s violin solos and banjo selections by female pupils of Mr. T.J. Armstrong. In 1894 Alice was elected as one of the first women overseers of the Penn University Museum. Sadly, that same year Alice took ill and died during the couple’s annual summer sojourn to Bar Harbor, Maine. Her funeral took place July 25th at 11:00 am in their home at 509 South Broad St.

After Alice’s death James returned to the Yellow Mansion a few blocks north at Broad and Walnut Streets where his mother Agnes still lived. In 1902 Agnes died two weeks after suffering a fall from slipping on a rug. She left to James the bulk of her five million dollar (that’s 1902 dollars!) estate. Then, in 1904 James married Isabelle Armstrong, the society editor for a Washington, D.C. newspaper and daughter of Brig General Frank C. Armstrong. Fourteen months later, James became ill and died of pneumonia on March 6, 1905. Although Isabel had the Yellow Mansion thoroughly renovated and refitted after their  marriage, she sold it a few months after James’ death and it was replaced by the office buildings that remain on the site today

Isabel Armstrong Lippincott moved to 204 Rittenhouse Square. This Lippincott house was called the “White Mansion.” The house had two of the columns from the Yellow House, and many Lippincott portraits. On March 20, 1909 she remarried Archibald Barklie, a banker in NY and NJ. After the honeymoon they went to their home in Bar Harbor, and then on to live in Washington, D.C.

James Dundas and Alice Lippincott are buried together in a crypt at Laurel Hill cemetery in Philadelphia.